From the moment I finished reading, Ninja! written and illustrated by Arree Chung, I knew I had to create a story time using this picture book about Maxwell, a boy obsessed with ninjas. He silently sneaks around the house, surprising unsuspecting family members, surreptitiously thieving snacks, abruptly ending his dad’s couch nap, and earning both the outrage of his little sister and disapproval from his mother. In the end, he invites the little sister to join him in the ways of the ninja, and one is left to imagine the amusing havoc they will wreak together. The spare narration of Maxwell’s ninja thoughts amusingly contrasts with the illustrations, which show the true picture of what is really happening.

I had a much younger group than usual at the public library storytime, which ranges from K-5, so I highly edited the excerpts I had planned to read from two non-fiction books, to give background information about real 14th century ninjas, not just the ones kids are accustomed to seeing in cartoons and action movies. 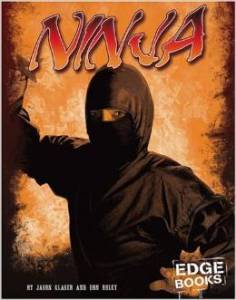 You Wouldn’t Want to be a Ninja Warrior!  A Secret Job That’s Your Destiny, by John Malam, and illustrated by David Antram.

First Lessons in Ninjutsu, on page 10 of, You Wouldn’t Want to Be a Ninja Warrior, was the inspiration for creating an obstacle course for little ninjas-in-training. The challenge was to create an age 5-10 appropriate, kid-appealing, non-injury-producing, collateral-damage-avoiding, indoor-space-confined way to practice beginner ninja skills. My creative co-workers chimed in with great ideas and supplies to use, and it took many hands and weeks of planning and prepping materials.

After reading, we adjourned to table stations with craft supplies that children rotated through at their own pace, before starting the ninja training course. 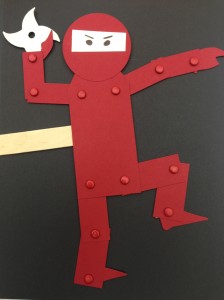 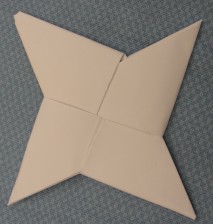 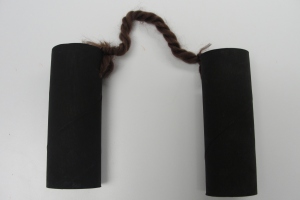 1)  Disguise:  I had new, donated t-shirts leftover from past athletic events (thank you City Parks & Recreation Department!) to make ninja masks. YouTube has many videos on how to turn a t-shirt into a ninja mask.  Alas, the group was young, and none of them wanted to wear a ninja mask.

2)  Balance:  Walk on rocks and a narrow piece of cardboard over water. Participants could make each subsequent trip more challenging for themselves by walking forward, backward, sideways, etc.

4)  Kicking:  Kick over boxes covered with wood-grain printed paper. We started with one box on each stool, and then stacked them three-high later. Some of our little ninjas were too short to kick them, so they punched them instead.

7)  Stealth:  Maneuver through a series of laser beams (red yarn tied between two rows of chairs). 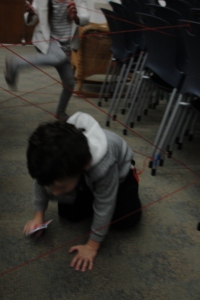 8)  Agility:  Jump over bushes made with large, crumpled sheets of green butcher paper.

Repeat as many times as possible, until a parent/guardian insists it’s time to go
for at least the third or fourth time.

Be sure to check out the website, www.arree.com, which has a wealth of fun things to do, including Ninja coloring pages, an activity guide that includes instructions on how to make an origami ninja star, and a hilarious book trailer.

Visit www.ninjefyme.com to upload a photo of yourself, and add a ninja costume.

A few more photos from a shorter 30-minute Ninja Storytime at the elementary school for the transitional kindergarten classes, which included the Ninja! book by Arree Chung, the ninja training course, and no crafts (definitely no ninja stars or nunchucks).  I was able to make the red yarn laser beam section twice as long–and twice as awesome.

Please reblog and share, but Wordpress told me to say this

© Sue Foote and Suebrarian, 2014. Unauthorized use and/or duplication of this material without express and written permission from this blog's author and/or owner is strictly prohibited. Excerpts and links may be used, provided that full and clear credit is given to Sue Foote and Suebrarian with appropriate and specific direction to the original content.

Teaching in the Elementary Library

Ideas and thoughts on teaching, learning, and living

One Book to Connect the World

Providing Youth Access to Ideas through their School and Public Library

Home of the Not So Nice Librarian

Making a library electric without electrocuting anyone.

A community of readers